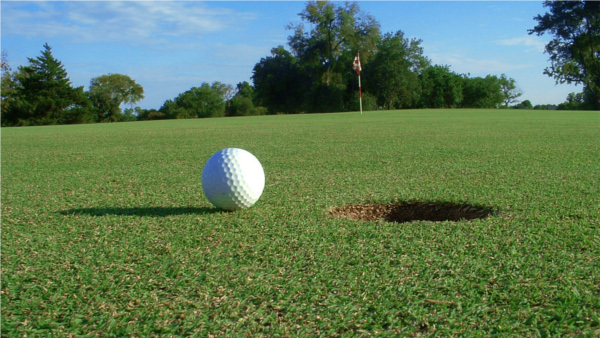 So why do golfers on the practice green before a round take 2 or 3 balls, drop em and then hit them one after the other toward the same hole without setting up or reading the green?

Some people might answer, well, Craig, they’re working on their stroke.

I’m guessing what they mean by stroke is the ability to send the ball down the chosen target line.
Ok, fair enough, but if that is what they really want to do, that’s got to be the least effective way to accomplish that. If I wanted to accomplish that, I’d go get my putting track out with side guides or just line up a couple clubs as a track to make sure I hit the ball square and follow through square… and I’d do it on a spot on the green where it’s flat and straight so that I could see the results. I would hit 6 or 7 balls in a row and I wouldn’t even be hitting at a hole, I would be aiming at a smaller target than that. I would train my stroke this way. Doesn’t that make sense? Maybe there’s an even better way but certainly hitting 2 balls to various holes is NOT the best way to train your stroke.

But hitting your putt where you are aiming it is only a part of actually making a putt. In fact, I would suggest that speed and break are even more important.
So, I’m going to guess that the true answer as to why golfers hit 2 or 3 balls from the same spot (like I used to do), is because they’re lazy.   They don’t want to go through the motions of reading a green and going through a routine like they do on a real putt. That would be REAL practice. I’ve asked and found that they actually think they are being more efficient and getting to hit more balls in the same amount of time which they consider “reps” or “repetitions.”

There’s this religious-like faith in repetitions in the golf world. But, isn’t it totally logical that if you are repeating an action that isn’t useful that you are ingraining poor results into your mind and muscles?

So what’s the truth about lazy practice putting?  You’re getting reps and practicing how NOT to read a green and rely on the feedback you got from your first putt (which never happens on the real course).  On top of that, those golfers are totally relaxed and at ease on the practice green with no pressure to make a putt.  Final result?  They are practicing UNFOCUSED golf and when they need to make a putt under pressure, it becomes extremely difficult.

You will not fix playing UNFOCUSED golf by buying more clubs.

A new putter or putting stroke will do nothing to reduce your score when your normal game is to play unfocused golf.

By the way, there’s nothing wrong with playing UNFOCUSED golf. That’s playing for the pure enjoyment of the game.  Go out there and have a beer, I play this way some of the time for the sheer fun of it.

But when I want to go low….FOCUS and INTENTION

So what’s my point here?  Whatever you do out there on the practice green or the range or even at home when you want to work on your game, BE INTENTIONAL.  What do I mean by this?

I’d love to see your INTENTIONAL warmup tips for on the practice green below and why you think it works.