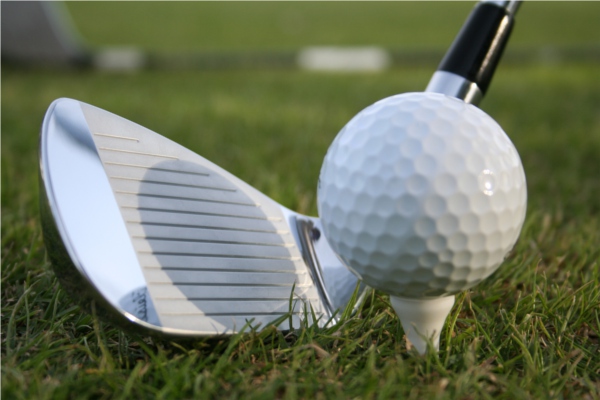 In the opening pages of this book I implied that there is something new in golf. Perhaps, as I close, I can bring it more into focus by explaining what is old.
There was a day when I might have attempted to
describe the golf swing by, first of all, handing you
fifty-seven varieties of stance. To these I could have
added that supergyration known commonly as the
“pivot” and another known as the “weight shift.” I
am willing to wager that Hemingway couldn’t put
either into words.

To impress you further, I could have explained in
detail, one by one, literally dozens of positions which
together form the pattern of the swing beautiful.
Hypothetically, you’d have a swing like Bobby Jones.
Actually, you’d have the same old swing you always
had.
I could have sold you a bushel basket full of posi-
tions at the top of the swing. To rescue you from
them, I could have peddled as many different contor-
tions of the hips.
Another old stand-by in golf books is a line or two
of verse, to be recited during the swing for the sake
of rhythm. As a matter of record, I didn’t even ask
—116—

you swing the clubhead back, pause, and swing it
down.
I have not stuffed a handkerchief under your right
armpit nor hung a plumb bob from your chin. What
I have done is divide the golf swing into its basic
maneuvers, the golf game into common sense.
The secret of consistency in the golf swing is to
hit every shot, from the putt through the drive, with
the same basic action.
Hold the club no tighter than you would as your
caddie hands it to you. Some good golfers hold the
club incorrectly, but no bad golfers hold it correctly.
So, as near as you can, hold it the right way. After
all, the hands are the only parts of the body attached
to the club.
In addressing the ball, stand erect enough to speak
when spoken to without looking up to answer. This
prevents you from pulling up as you swing, and per-
mits you to look up as much as your concentration
will allow you.
Play all irons midway between the feet. The woods
are played more toward the front of your stance to
allow for the projected face, particularly the driver,
which meets the ball on the upswing because the ball
is already in the air.

Use the square stance whenever distance is a prime
factor, opening it when distance is not.
Swing the putter with the hands, arms, and shoul-
ders as a unit. Start the backswing with every club
the same way. Ignore the follow-through and so-
called “wrist action.” Both are superfluous.
A chip is struck down upon. Any other way simply
is not a chip. This is the action which gets any ball
—117—

THE   NATURAL   WAY   TO   BETTER   GOLF
off the ground with an iron, and in turn causes the so-
called “follow-through.”
Pause between the backswing and the downswing.
This causes the slow backswing, which causes the
head to remain still.
Hit all your irons in the same tempo.
Proper footwork is as important as a proper hold
of the club. After all, the feet are the only parts of
the body attached to the golf course. They are the
motor of the swing.
Proper footwork finds the left knee pointing behind
the ball on the backswing and the right knee pointing
in front of it on the downswing.
With the driver, tee the ball as high in the air as
the tee will allow. Always tee the ball on par-three
holes.
Hit all shots with less than your full strength.
Three-quarters strength is about what is needed to
get all the distance of which you are physically capa-
ble. A long ball is composed of fast feet as well as fast
hands.
Learn the shots you can’t play, and fit the shots
you can into your own par.
Think before you address the ball. After you have
addressed it, concentrate only on hitting the ball.
With the putt, distance is more important than
direction in the long run.
Percentage golf is hitting the ball squarely at all
costs; a wild shot is not nearly so damaging as a mis-
hit ball. Percentage golf means hitting the fairways,
hitting the greens, and missing the hazards. Nothing
can be more important in your strategy than giving
all hazards a wide berth.
Approach each game with a tactical plan. For ex-
—118—

ADDING   UP   THE   SCORE
ample, make up your mind to stick to the percentages
of medal play.
Prepare your muscles for each game by hitting
balls on the practice tee or at least by swinging sev-
eral irons at once.
Don’t use your driver off the tee simply because

the caddie handed it to you. Start with a spoon, and
work your way to the driver through the brassie. The
tee shot is still a percentage shot.
Never tee your ball up in the fairway. Each time
you do, you are doing the equivalent of spreading
Vaseline across the face of the club.
Don’t seek advice on your selection of clubs. Hit
what you feel like hitting, for indecision will ruin
the shot even though it was the correct club.
Debate each of your first choices of clubs. Do
hazards dictate playing to the front or back of the
green? Or the right or left of it? Be wary of any pre-
conceptions you may have about the correct club.
Aim at the green, not at the pin. You can’t hit it
with a golf ball if you can’t hit it with a rifle.
Play the last putt as decisively as the first drive.
There are eighteen holes to a game of golf, not seven-
teen and a half.
Bad golfers think first of recovering from hazards.
Good golfers think first of getting out of them.
The trap shot should be the easiest shot in golf.
You don’t even have to hit the ball.
Think strongly in terms of the shot you want to
play. Think “hook” if that’s what you want the ball
to do.
On either a downhill or uphill lie, always play the
ball nearer the higher foot.
Reduce all trouble shots to what you probably can
do, not what you possibly can do.
—119—

Excerpt from “The Natural Way to Better Golf”