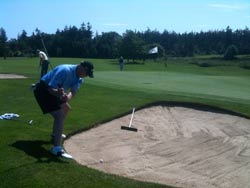 HOW to play golf one shot at a time

How many times have you been out on the course and experienced frustration at not being able to play the kind of game you know you know how?  I’ve got an answer here today for you.

Mike is a fanatical weekend golfer.  He plays year round and whenever he can get enough time for 9 holes or just an hour to hit a few balls on his way home from work mid-week.  He loves reading golf magazines and email newsletter tips and really enjoys following the professional tours.

When the weekend comes around and he gets to play with his buddies in a friendly match with some money on it, he is so excited driving to the course that he just can’t stop smiling and his body has this light tingling feeling of anticipation. He loves the camaraderie and the competition.

He pulls into the lot visualizing his best shots and talking himself up that he’s a great putter.  After checking in and getting a small bucket, he proceeds to work his way from pitching wedge to driver on the range…and he’s feeling good!

He moves over to the practice putting green and calmly sinks 4-5 foot putts one after the other.  He takes a few lag putts and is satisfied with how he is reading the greens in leaving the ball within 2 feet.

He’s ready..and he feels it! His confidence is sky high.

After a few light verbal jabs shared with his buddy, his group is called to the tee and his first shot is a good one which increases his excitement to be out on the course this very fine day!

His approach shot is a bit short so he pulls out the lob wedge to float it over the bunker for a soft landing.  It’s a tricky shot but he’s done it successfully many times.

Unfortunately, he blades it a bit and the ball runs past the hole and he ends up 2 putting for a bogey.

Still beating himself up over the chip shot, he goes to the next tee and hits a wild duck hook.   Bewildered where that came from, he still manages to pull out another bogey on the hole.

Mike starts figuring out what he has to do for the next few holes in order to “get those 2 shots back” in order to wipe the memory of them from his mind. In some twisted way, he’s connected future birdies in his mind with past mistakes much like an amateur gambler does when thinking “I need to get even” after being down and then starts doubling the bets from this faulty thinking.

Mike starts pressing for a birdie to make up for those bogeys.  He’s now lost the great feelings he had when he showed up to the course. His mind is making all sorts of “calculations” about the rest of the round.  He’s forgotten about having a great time with his buddies.

He’s forgotten why he plays golf in the first place. He’s totally centered his entire experience on his score….

…and that’s why he’s not scoring well.

And now he’s added frustration to anger and disappointment. Not the best state to be in to have a great round.

My problem with a lot of golf mental game advice is that you hear such simplistic terms without the tool to make it happen.   Here’s my tool to play one shot at a time:

You see, all of Mike’s problems came from thinking about the past or the future.  When you think about what your senses are experiencing right now, you are directing your mind in a very easy, natural way that works wonders for your golf score.

The funny thing is, you probably do this on the practice range and green. The really great thing about this, is that you can practice being in the present away from golf.

You can do it anywhere.

See how long you can put all your focus, awareness and attention on what your senses are doing before going into some kind of analytical thinking.  The more you do this off the course, the better you will do it on the course…and your best game will show up without even trying.

p.s. I’d love to see your comments below 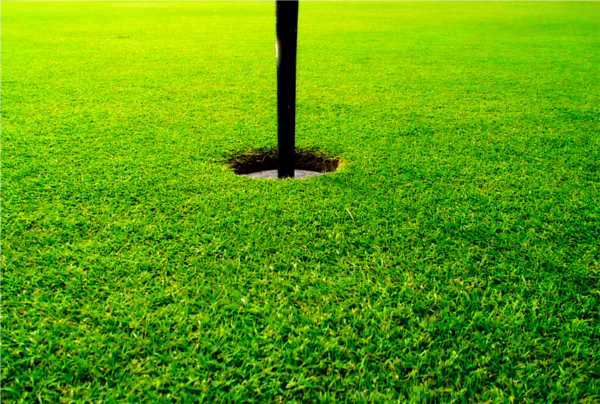 Bubba Watson Lessons from the Masters 2012

Bubba Watson has never had a swing coach. He hasn’t had a lesson since he was 10 years old.

His playing approach is contrary to every golf strategy book ever written…as he says it like this: I always ATTACK.” He goes for the pin no matter the situation.

Bubba Watson isn’t a big student of the game either. Here’s what he said about that:

“I don’t play the sport for fame. I don’t try to win tournaments for fame,” Watson said. “I don’t do any of that. It’s just me. I’m just Bubba. I goof around. I joke around. I just want to be me and play golf.”

About his swing he said:  “I just swing funny and somehow it works.”

This guy is my new hero.

In an age where parents are moving their families to Florida so they can play year round and to work with Golf Digest top instructors, is Bubba just a rare exception or does he know something most golfers don’t?

It’s my contention that every golfer can adopt his secret and improve your game with it. It’s not hard. In fact, I think it’s hard to hold on to those old beliefs that your swing isn’t good enough….IT IS.

I read an article that said that Tiger would try to pair with Bubba on practice rounds in the majors because he was intrigued at how someone could make the ball move the way Bubba does without ever having had a swing coach. Tiger probably studied Bubba’s swing in great detail to try to find the mechanical key that makes it work. When all the while, the secret was probably in a few simple words and sentences that Bubba plainly and simply gives away for free.

What can us mere mortals learn from Bubba?

Does Bubba have talent? Of course.  More than Tiger or Phil? I doubt it. But he knows how to win.

What does he have a tremendous amount of?

TRUST in his swing and his game.

You can spend your life trying to tweak your swing or your putting stroke or you can get on to the business of scoring well. The two don’t always jive together. Just ask David Duvall if you don’t believe me.

Here’s another gift Bubba has given us. Will you accept it?  From Bubba himself in a post-win interview:

“I don’t even know what happened on the back nine. … Nervous on every shot, every putt. Went into a playoff. I got in these trees and hit a crazy shot that I saw in my head, and somehow I’m here talking to you with a green jacket on.”

Nervous on every shot, every putt

You can play well AND feel nervous.

The mental game is everything, just ask Tiger who is in the midst of re-learning that.

And by the way, remember when I said last year that Tiger Woods isn’t mentally tough.  Well, maybe now he is even though he didn’t win the Masters.  He did win last week and that says a lot…AND it doesn’t prove I was wrong a year ago when he couldn’t win anything after faltering from his personal problems.

Nobody is stuck at where they are at today. Everybody can change and does change. That’s the only constant!

All golfers can adopt a new way of thinking or a new focus in order to break through what’s been holding them back on the course and life. What can you take away from this for your game that can open some new doors that had previously been closed?

And here’s another rambling that will mean something different to everyone with regards to golf…and life that may or may not have anything to do with Bubba Watson and the 2012 Masters…you decide:

Therefore, the only thing that brings us sustained high enjoyment is the chase for the better game, not a score for any single round.

Let me hear your opinions on any of this below….

p.s. that last thing just popped into my head as I was writing this.  It meant something to me, I hope it does for you.