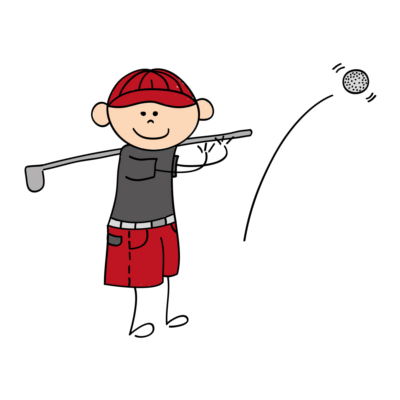 How to get a junior golfer to listen to you

It’s the 18th hole and my junior golfer, 15 year old son, walks up to the green and eyes his ball lying about 25 feet from the hole. It’s a double breaker with a bit of an uphill putt that he needs to win a bet from me.   I follow him around the green as he squats behind the ball to take a look at the slope.  I hover around him and look him in the eye and finally decide to give him a little lesson in managing his mental game.

I ask him: “So AJ, right when you take the putter back, do you breathe in, out or hold your breath?”

I have a sly smile on my face as he sends mental daggers my way through his eyes.  He is determined to show up the old man for the first time in our many years of playing together.  I just keep smiling and smirking while noticing his body language reeks of tension.

Flash backwards in time for a moment.  I’ve been playing and teaching my junior golfer since he was 3 years old.  Before that, I actually pushed him around a course while in a jogger’s baby carriage in his first year while I played the game. Heck, it was the only way I was going to get to play some weekends when his mother left him with me.  I’ll never forget the gyrations I went through to try to keep him either asleep or entertained enough to stay quiet on a golf course!  From a distance, other golfers must have thought I was nuts doing African dances around my funny-looking golf cart!

Come to think of it,  you know, those times were probably very instrumental in my learning how to deal with distractions and still play the game at a high level.  Did you know that Tiger Woods Dad would purposely yell and throw clubs in front of Tiger while he was swinging in order to teach him that famous Focusing ability he is famous for?

But I digress from the main story.  From the age of 3 til about the age of 12, AJ would listen and hang on every word that I would say about golf.

I showed him a very simple swing that served him very well and we enjoyed many years of playing together, driving golf carts in crazy ways, and celebrating another grand day at the course with a tall soda (and beer) at the 19th hole.

And then, something happened…AJ hit that age where he all of a sudden “knows everything” if you know what I mean.  His game started to get better and I could see this wall come up any time I would talk about the mental game of golf.  In his eyes, it was just a matter of him playing more and practicing more and he’d seen the beginnings of improvement from that formula.  Never mind that I write to 10,000 golfers every week, never mind that I’ve worked with hundreds of kids and elite athletes from all over the world. Never mind the fact that I took my own golf handicap down to a 5, shot a 1-under and a hole in one, all without practicing….No, never mind all that…I’m just Dad and I don’t know anything, right?

Flash  forward to that 18th hole where he challenged me to a bet where if he won, I would have to buy him some new Nike shoes and if I won, he would have to wash my car 10 times.   He wants those shoes really bad.  I don’t let up as he walks all around his putt and takes an unusually long time to line it up. I know that he is a bowl of jello inside and his legs look like they will give out from under him at any moment.

He takes the putter back very hesitantly and leaves himself a 4-footer.   I mentally pounce all over him as you can feel the pressure in the air between us.  I tell him that he will not be able to handle the pressure and that I am looking forward to a clean car for the foreseeable future.

Hi misses the putt and I say nothing, not a word.  We walk to the car in silence as I let him process the whole thing his way. I turn the radio on in the car to break the tension as we drive home.

A whole month later, he comes to me and tells me he is ready to learn about the mental game and we get going in earnest.

I just learned this week, as I write this, that AJ has earned a college scholarship to play golf in college. He is a fine, upstanding, moral young man who impressed a college coach not just with his golf skills but with his personality and character.

Sometimes, golfers need to get their lessons in a certain way that only works for them.  After working with hundreds of golfers in person and more online, I’ve noticed a few patterns about what makes you a play your best game.  It’s all about being able to play under pressure. More to come on that…